Game of Thrones (01:30-26:30): As we mentioned in the episode, the entire world has Game of Thrones Season 8 takes. Below are a few interesting columns, blogs, and podcasts we’ve come across since the finale aired: 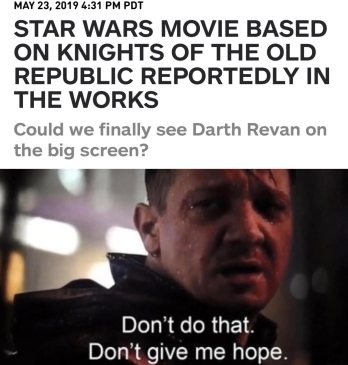 Everything is Terrible in Episode V of Ruminations! When writing about our last episode, I quoted T.S. Eliot since cruel, cruel April brought us the ending of two of our favorite franchises. Little did I know how cruel it would actually be! Another Eliot quote is appropriate now (this one the conclusion to The Hollow Men):

This is the way the world ends
Not with a bang but with a whimper.

Whimper to its conclusion Game of Thrones did–and its lackluster finale takes up the full first half of our episode–but it wasn’t alone in its dullness. The live action Aladdin remake and the much-hyped John Wick Chapter 3 – Parabellum, released in back-to-back weekends, were also quite lame, to put it mildly. To top off this whirlwind of recent mediocrity, a bit of (potentially) soul-crushing Star Wars news also leaked this week. When will the suffering end?

Avenger: Endgame was pop culture’s only saving grace and we gladly left it out of our lamentations (until, ya know, the end of our episode, when we decided to actually talk about it. Oops?)

Listen and complain along with us! And, as always, SPOILERS!

END_OF_DOCUMENT_TOKEN_TO_BE_REPLACED

For the fourth episode of the Ruminations Podcast, we discuss the long-awaited endings of our beloved Game of Thrones and The Avengers. (“April is the cruelest month,” as Eliot said.) We recorded hours before the premiere of GoT’s 8th season, but we spend more time talking about the past 7 seasons anyway, so it’s not outdated yet! (One of Chris’s predictions has already come true! Psst. It involves dragons.) For both our GoT and MCU discussions, SPOILERS GALORE!

END_OF_DOCUMENT_TOKEN_TO_BE_REPLACED

Edit 3: Overall, 9/25. I should never actually gamble. However, I am happy with most of the outcomes of the evening, although I’d rather Birdman had won for Best Musical or Comedy, and while I didn’t necessarily care for Boyhood, I’ll admit that its feat should definitely be recognized. On the TV end, I really overestimated the love for True Detective, which was all but shut out by Fargo (YES!) and The Normal Heart. And I guess Amazon is the new Netflix, with 2 wins for Transparent vs. 1 win for the latter company (Kevin Spacey for House of Cards’ second season). Also, who has actually seen The Affair?? Yeah, me neither.

Edit 1: With less than half of the show left to go…. my ballot is coooompletely off. More to follow afterwards…

Tonight is the 72 Annual Golden Globe awards! Super comedy duo Tina Fey and Amy Poehler return as co-hosts, and with many close races that will serve as a possible preview of February’s Oscars, it should at least be an interesting night.

Best Actress in a Drama

Best Actor in a Drama

Best Actor in a Musical or Comedy

Best Actress in a Musical or Comedy

(Really, HFPA? This is by far the most bizarre category of the night.)

Best Actress in a TV Drama

Best Actor in a TV Drama

Best Actress in a TV Comedy

Best Actor in a TV Comedy

Best Actress in a Miniseries or TV Movie

Best Actor in a Miniseries or TV Movie

These are my predictions for tomorrow night’s Emmy Awards. It should be a big night for Breaking Bad, True Detective, and Fargo, to say the least. I am not familiar with some of the shows nominated, such as The Good Wife or Orange is the New Black, the latter of which is up for a multitude of awards and will probably win for Best Comedy Series. In cases like that, my predictions/thoughts will be based on the general consensus that I have gathered from friends and family who have watched these shows as well as from reviews and thoughts of critics online.

My predicted winners are in red and any additional thoughts of mine will be underneath each category in green.

Writing for a Comedy

Directing for a Comedy

Supporting Actor in a Miniseries or Movie

Supporting Actress in a Miniseries or Movie

I would really, really, REALLY like Allison Tolman to win for Fargo. She went head-to-head against Billy Bob Thornton and Martin Freeman and was equal to, if not better than them a majority of the time.

Writing for a Miniseries, Movie, or Dramatic Special

Hawley wrote all 10 episodes and completed the absurd task of creating a TV series based on one of the most critically-acclaimed movies of all time that can be called a masterpiece in its own right.

Directing for a Miniseries, Movie, or Dramatic Special

Writing for a Variety Series

Fallon has been absolutely wonderful since taking over for Jay Leno earlier this year. He is a breath of fresh air in the late night talk show universe.

Guest Actress in a Comedy

Guest Actor in a Comedy

Supporting Actress in a Comedy

Supporting Actor in a Comedy

Directing for a Drama

Gilligan and Fukunaga both did amazing jobs on Breaking Bad and True Detective, respectively, but it is Marshall and his 50-minute Battle of the Wall that served as the penultimate episode of Game of Thrones who deserves this directing award.

Writing for a Drama

Walley-Beckett’s “Ozymandias” is one of THE great TV episodes of all time, and this award is a no-brainer, even considering Vince Gilligan’s ability to tie up all loose ends in one of the neatest series finales of all time, “Felina.”

Guest Actress in a Drama

I mean, she poisoned King Joffrey. Give her ALL the awards.

Guest Actor in a Drama

Supporting Actress in a Drama

Supporting Actor in a Drama

Peter Dinklage’s speech at the end of “The Laws of Gods and Men” is one for the ages.

Please not SNL. I’d rather Bill Maher won over SNL.

Lead Actress in a Comedy

Lead Actor in a Comedy

Lead Actress in a Miniseries or Movie

Lead Actress in a Drama

Lead Actor in a Miniseries or Movie

Can there be a tie? Martin and Thorton were both exquisite in Fargo, but if I had to pick one, I’d go with the actor who had to show a much greater range, and that was Martin Freeman as the loser insurance salesman-turned-murderous creep.

Lead Actor in a Drama

Hey, if Jeff Daniels won last year, maybe he can upset again this year…right? I think I’d throw my computer at my TV if that happens. While I would love Jon Hamm to FINALLY win an award for playing Don Draper, this race is definitely between Bryan Cranston and Matthew McConaughey. Cranston was perfect in the final 8 episodes of Breaking Bad, especially “Ozymandias,” but McConaughey has the story and the hype and the momentum (AND THE OSCAR) behind him. Purely the fact that Craston already has three Emmys for playing Walter White says that McConaughey will get it this time. And poor Woody. He was great in True Detective too, but not existential meltdown-good.

Ah, screw it. I said Orange might win above but I think Louie could manage an upset. Let’s go with that.

The final award of the night is definitely between Breaking Bad and True Detective. Game of Thrones was great (and my personal favorite of all the shows nominated), but it wasn’t as good as past seasons and some rare “off moments” (coughincestrapecough) soured its overall taste in my mouth. Mad Man was the same as ever, slow and smoldering with some awesome moments to close out the season, but its time in the Emmy limelight has clearly passed – any chance at another win will have to be next year for its final season. I have not seen Downton Abbey so I cannot say whether it has a chance or not for myself, but I did see House of Cards, and this season was… well, it was quite bad. (Thanks for taking Hannibal‘s spot, dude…)

Last but not least, I would much rather have had True Detective in the Miniseries category as it will not have the same cast next season, just like Fargo and American Horror Story. Also, while I really enjoyed True Detective, especially the performances from its two leads and the long take at the end of Episode 5, I felt it was a lot slower than it should have been, and its ending – which I happened to love – divided a lot of people who had been watching the show from the beginning. Breaking Bad had the more perfect eight-episode block, and I personally have never been more engaged by a show than when its final season aired last summer. The time in between episodes seemed insurmountable!  From Hank confronting Walt early on, to Jesse’s betrayal, to the cut-to-black in the middle of a climactic gunfight in the desert… those cliffhangers caused me heart problems! The final four episodes, “To’hajilee,” “Ozymandias,” “Granite State,” and “Felina,” will be studied by filmmakers and storytellers alike for years to come. THAT is how you end a television show.