I guess, subconsciously, my goal in life is to become as close to New York Post film critic Kyle Smith as possible.

I saw a little movie called Guardians of the Galaxy yesterday morning, and following my recent trend of completely not caring for a movie that almost everyone else – critics, film buffs, and the average moviegoer alike – has loved and praised, I left the theater neither moved nor disappointed by the film that has a 92% rating on Rotten Tomatoes.

There is a point toward the end of the movie where deep-voiced, hooded, staff-wielding supervillain Ronan (which is all I can remember about him) raises his arms mockingly and asks a crowd of scared spectators something along the lines of “This is it? Your guardians of the galaxy?” and I found myself agreeing with him completely.

Really? This is the best blockbuster of the summer? What I’ve seen in headlines referred to as “Marvel’s Most Important Movie”?

I just don’t get it. 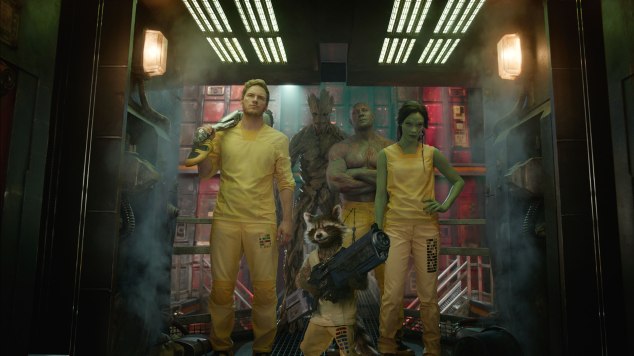 Now, I didn’t hate Guardians of the Galaxy. I can’t even say I disliked it. I laughed at some of Rocket’s lines, and generally appreciated Drax the Destroyer and his inability to understand metaphors, and immensely enjoyed that one Jackson Pollock reference…

But I did not care about the plot. About the race of Xandarians or whatever that Ronan was supposedly going to wipe out. I didn’t care about Benicio Del Toro’s cameo as The Collector, which tied into Thor 2 and I’m guessing ties into The Avengers 2 and other upcoming Marvel movies, and I didn’t care about the forced love story between Chris Pratt’s Peter Quill/Star Lord and Zoe Saldana’s Gamora. And then, once the film erupted into an excess of explosions and lasers and CGI ships and dizzying maneuvers in the climactic battle to board Ronan’s ship, my brain kinda-sorta just checked out.

In this regard, Guardians of the Galaxy might as well have been titled Star Trek 3, as it felt exactly like J. J. Abrams’ reimagined, spectacle-filled, and ultimately soulless Star Trek, only this time with some Star Wars-esque clothing and sets. Chris Pine- I mean, Pratt’s womanizing, goofy scoundrel, Zoe Saldana as a hard-ass with a soft spot for said roguish space adventurers, an alien whose humor comes from not being able to understand human emotions and insinuations, and the growling, brooding, cookie-cutter alien of a supervillain out to disintegrate planets for some unknown or boring reason…need I go on? I can only PRAY Star Wars VII is not this generic.

Overall, Guardians of the Galaxy ties into my slight (and I mean slight) disdain with Marvel’s Cinematic Universe, which, while having a remarkable track record of producing a string of decent-to-good films without any major bombs, is all about the end game rather than the movies being made and released “in the moment.” Because Marvel has mapped out its movies for the next ten or so years, each movie released is somehow meant to tie into one, two, or five movies down the road. While admittedly cool to see coherence and a broad sense of continuity between films, as well as all the character crossovers and inside jokes and references to other films, it gets a little tiresome when you realize that none of the films can really stand on their own, and that when you do watch, say, The Avengers in the objective context that five or six other films had built up to this point, you’re almost guaranteed to think “Wait, that’s it? After ALL that?” Yes, these movies are all enjoyable on a superficial level, but think how much deeper they would be if focus were put on each individual film that together naturally build to a crossover film. This crossover would then serve as a compliment to the films that preceded it rather than the end goal of the franchise. Maybe DC can do what Marvel has been unable to– Oh wait. Batman v Superman: Dawn of Justice.

As for my dwindling taste in movies, let me not stop with Guardians of the Galaxy. Just so people reading this post are even more upset with me, I will admit that this is the third highly-praised film that I have felt “meh” about in the last month alone. Guardians follows in the footsteps of Dawn of the Planet of the Apes and Boyhood (both also over 90% fresh on RT), but I would honestly say that I enjoyed Guardians a lot more than the latter two.

So… Am I just wrong? Or is everyone else wrong? Either way, I feel cursed, like I somehow found a chest full of Aztec gold that makes me indifferent to current universally-acclaimed movies.

All I know is that next time I decide to go to the movies, before I step foot into the theater, I need someone to ask me, ” Is spending $12 or $7 or even $1 worth it for a movie that will most likely disappoint you?” and then hit me if I answer “Yes.” Please and thank you. You will forever have my gratitude.