Happy New Year from Ruminations! To celebrate the start of 2020 and the end of the 2010s, we talk* about 10 of our favorite movies from a decade that wasn’t all that great when it came to cinema. (At least in our opinions, but our opinions are Correct.) Stick around for some honorable mentions!

END_OF_DOCUMENT_TOKEN_TO_BE_REPLACED

The 8 movies nominated for this year’s Best Picture Oscar make up a curious group of films. They’ve showcased extraordinary feats of cinematography, editing, acting, and perseverance. A few character actors finally got their time to shine, and a few historical figures in science, war, and civil rights were finally given proper representation on the big screen. Some of the films have elicited absurd amounts of controversy, whereas others have received absurd amounts of praise. My opinion on a few of these films is quite high. On others, I am mostly indifferent. One, I outright dislike, and it is certainly NOT one of the best films this century, Mr. A.O. Scott, thank you very much!

Without further adieu, my take on this year’s Best Picture nominees:

Boyhood
Okay. I respect the dedication put into this movie. I happen to really like all but one of the other Richard Linlater movies that I’ve seen (that is, the 3 Before movies, School of Rock, and Bernie; I hated A Scanner Darkly), and I went into Boyhood with extremely high expectations. But 2 hours and 45 minues of nothing was NOT worth my full price ticket at a New York City theater, and watching it a second time completely killed any positive inklings I may have had toward the movie from that first viewing. By the end of the film, I absolutely HATE the brooding, moody, confused hipster that main character Mason has become. And since his poor childhood is the product of all the people around him, I hate them all, too. When you look past the gimmick that was shooting the same movie over a 12 year span, you realize that the film’s writing is not too great, and the acting is actually kind of dull; Patricia Arquette will win Best Supporting Actress for her role as Mason’s mother, but it is more of a consolation prize in my opinion for showing up for the same gig for 12 years in a row than for any sort of profound acting chops on her part. As someone has said, if Boyhood had been shot in one year instead of 12, no one would give a flying bleep about the film, especially due to its lack of story and its crappy, unlikeable characters. And yet it’ll probably win Best Picture. This coming after the fact that Linklater’s immensely-better Before Midnight wasnt even nominated for Best Picture last year just proves that there is no justice in the world for a film curmudgeon like me. 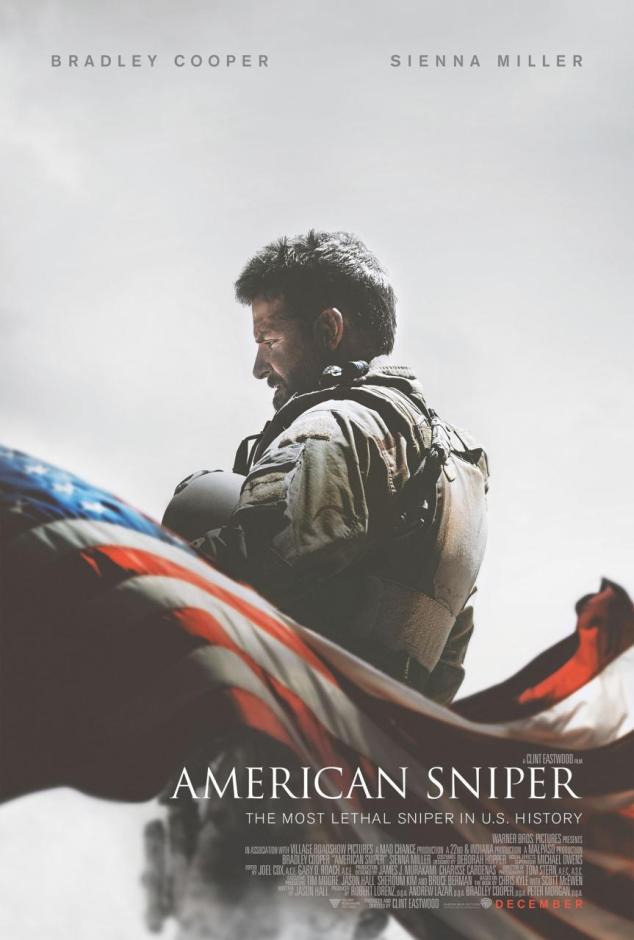 American Sniper
I already wrote plenty on Sniper (see previous post), but I still don’t see a reason for all of the controversy, let alone all the hype. While the movie was definitely emotional and worth seeing once, Bradley Cooper’s bulked-up physique was honestly the most impressive part of the film. I guess one positive about the movie was that the entire time, I kept thinking, “How the hell did 84-year-old, senile, grumpy Clint Eastwood direct something so intense and big?” The fact that the finished product hit all the right emotional chords can be attributed to the skills of Eastwood as a director.

The Theory of Everything
Eddie Redmayne was Oscar-worthy as British ASL-stricken scientist Stephen Hawking, though the movie itself wasn’t anything that special. It told a decent, if certainly unconventional love story, and featured some beautiful music, but it still didn’t do that much for me. It was worth seeing once, but Best Picture worthy? Not having it. 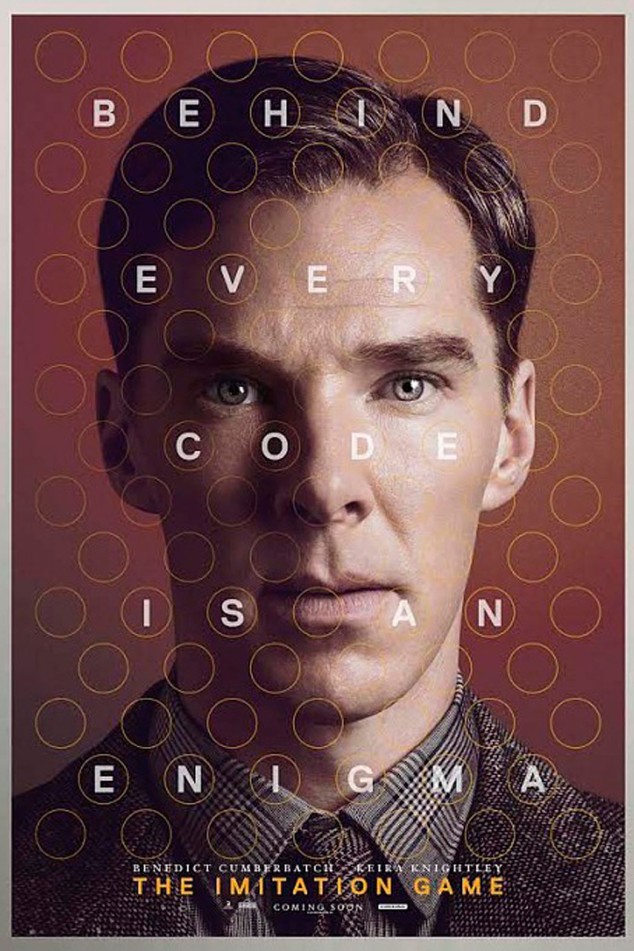 The Imitation Game:
I really enjoyed The Imitation Game the first time I saw it. I loved the British World War II setting, the Desplat score, and the way the story was edited together, with its three timelines and its use of WWII-era newsreels and stock footage. However, the second time I watched it, I wanted to go to sleep. While still in no way a bad movie, it just didn’t seem like anything special upon a second viewing. I love Cumberbatch in almost everything he’s done, but I wasn’t THAT impressed by him as Turing, and Charles Dance literally walked off the set of Game of Thrones, took off his armor and removed the crossbow bolts from his chest, and put on a British Naval uniform. How can that be a bad thing, you ask? It shouldn’t have been, but Lord Tywin popping up in the middle of a World War II biopic just seemed out of place to me. Also, upon second viewing, the ending, while sad and emotional, seemed like it was a little too on the nost in its political messaging. The on-screen text that makes up the film’s epilogue focused more on Turing’s sexuality than his impact on WWII, codebreaking, and computers. While not wrong in any way, this text attempted to make a film that tackled so many broad historical and social topics to be a lot more streamlined and political than it actually was.

Birdman or (The Unexpected Virtue of Ignorance)
I very much enjoyed Birdman the first time I saw it, though, like with Boyhood and The Imitation Game, my enthusiasm for it lessened quite a bit after seeing it again. The amazing feat of Emmanuel Lubezki to make the film appear to be one long take wore a bit thin the second time through. The use of long takes of course made the superb acting stand out even more, as Keaton and Norton and Stone had to memorize large amounts of lines and blocking at a time, though, again, if the movie were filmed conventionally, would its dialogue and plot hold up? Probably not. Michael Keaton deserves the Oscar for his performance, but the rest of the film is a bit too eclectic and schizofrenic for me to outright love it. The drum score drove me a bit insane (as was the point, I think), and the ending really didn’t make any sense at all, no matter how you looked at it. Unquestionably, my favorite part of such a stylized and wonky film was the fleeting moment (probably a mistake that couldn’t be covered up due to the use of long takes) when Zack Galifianakis forgot what movie he was a part of for a split second and reverted into his Hangover schtick by calling Martin Scorsese “Martin Scorseez.” Simply amazing.

Selma
I didn’t expect to like Selma and I wound up loving it. Again, I probably wouldn’t watch it again, but it was worth seeing once and actually left an emotional impact on me, unlike a few of the movies I’ve already mentioned. David Oyelowo was fantastic as Dr. King, and his speech at the end was one of the more inspirational scenes in a movie this past year. I’m extremely happy that the movie remained apolitical for almost the entire time, though the reference of Ferguson in the John Legend/Common song at the end pulled me right out of the historical period of the Civil Rights movement and brought today’s divisive, nasty political maelstrom into a film that, for almost its entire running time, had been above such pettiness. Plus, since the events in Ferguson couldn’t have happened before filming started, it made its inclusion in the film seem even more shoehorned in. Why must everything make a statement, no matter how unnecessary? Why can’t we ever appreciate something in its original context, and not in comparing it to today?

The Grand Budapest Hotel
With a film that takes Lord Voldemort himself and makes him into a heroic, comic lead character, uses miniature scale models of majestic hotels and icy mountainsides, features an eclectic group of the quirkiest actors around, such as Jeff Goldblum, Bill Murray, Edward Norton, Jason Schwartzman, Adrian Brody, Tilda Swinton, Willem Dafoe, Owen Wilson, etc., and switches between 3 times periods, each represented by a different aspect ration, all while accompanied by a whimsical Alexandre Desplat score, Wes Anderson has finally become mainstream. The Grand Budapest Hotel was by far one of the best films to come out last year and the first of these eight Best Picture winners that I could easily see myself watching again.

Whiplash
As I said in my last post, a movie that can make me angry enough to feel it in my stomach, that can shock me to the point where I’m yelling “Oh my God” out loud, and that can make me jump out of my seat in triumphant joy is really something special. Whiplash is that type of movie. J.K. Simmons, the Yellow M & M and the Farmers Insurance guy, J. Jonah Jameson and Juno’s father, is the band instructor from hell (not to mention an extremely relatable character to terrible people I’ve experienced in real life), and will deservedly walk away with the Best Supporting Actor Oscar. Miles Teller is awesome as a drum student worked to the point of exhaustion, with sweat, blood, and tears literally staining his drumsticks and the heads of his drums, and he reportedly did a lot of his own drumming on the film. The climax, a whirlwind of sound and close ups, is one of the best-edited sequences in a movie in a long time. Whiplash is definitely a painful and exhausting movie to get through, but, oh, is it worth it! And it is my favorite Best Picture nominee by a substantial margin from 2014.

May the best film win (though it probably won’t).

Edit 3: Overall, 9/25. I should never actually gamble. However, I am happy with most of the outcomes of the evening, although I’d rather Birdman had won for Best Musical or Comedy, and while I didn’t necessarily care for Boyhood, I’ll admit that its feat should definitely be recognized. On the TV end, I really overestimated the love for True Detective, which was all but shut out by Fargo (YES!) and The Normal Heart. And I guess Amazon is the new Netflix, with 2 wins for Transparent vs. 1 win for the latter company (Kevin Spacey for House of Cards’ second season). Also, who has actually seen The Affair?? Yeah, me neither.

Edit 1: With less than half of the show left to go…. my ballot is coooompletely off. More to follow afterwards…

Tonight is the 72 Annual Golden Globe awards! Super comedy duo Tina Fey and Amy Poehler return as co-hosts, and with many close races that will serve as a possible preview of February’s Oscars, it should at least be an interesting night.

Best Actress in a Drama

Best Actor in a Drama

Best Actor in a Musical or Comedy

Best Actress in a Musical or Comedy

(Really, HFPA? This is by far the most bizarre category of the night.)

Best Actress in a TV Drama

Best Actor in a TV Drama

Best Actress in a TV Comedy

Best Actor in a TV Comedy

Best Actress in a Miniseries or TV Movie

Best Actor in a Miniseries or TV Movie